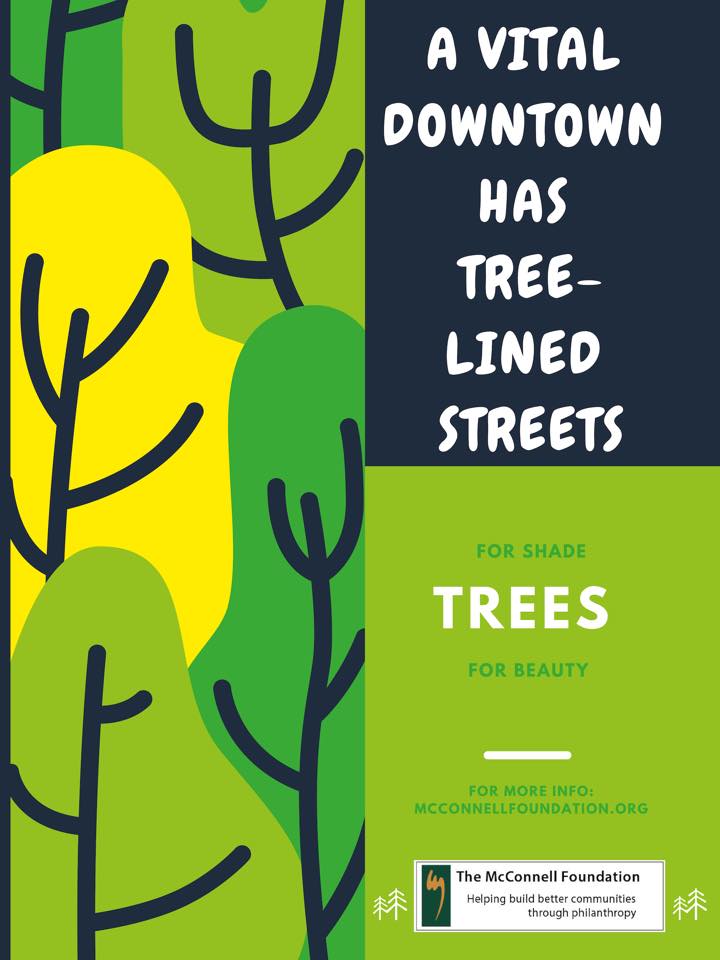 The McConnell Foundation has provided a grant of $41,500 to the City of Redding to support downtown street trees in Redding. This matching grant will be supplemented by in-kind donations from The McConnell Foundation, bringing the total support to $81,500. This match helped the City of Redding be more competitive at the state level, winning a grant of approximately $300,000 from CAL FIRE’s Urban & Community Forestry Program for the purpose of planting street trees in downtown Redding. This grant will result in up to 175 trees planted in downtown Redding.

Per the application to CAL FIRE: “The previous years of California’s drought have played a substantial role in the downfall of Redding’s downtown street trees. As with many older downtown areas, trees do not typically have irrigation and required manual watering to get them through the establishment period. As groundwater became scarce and even with volunteering and watering initiatives, trees throughout Redding’s downtown have slowly begun to disappear.

Through several Community Service Advisory Commission meetings in 2014-2016, members of the public expressed their concern with Redding’s disappearing downtown street trees. In response to this, the Community Services Department hired a consulting firm to help craft the Redding Downtown Street Tree Management Plan – 2017 to inventory current trees, evaluate and advise on maintenance practices, and guide the reforestation efforts of the study area presented in this proposal. The project for which funding is sought is the full implementation of this plan for the benefit of energy-saving shade, increased walkability of downtown streets, carbon sequestration, captured stormwater runoff and the social benefits of a greener, more vibrant downtown.

The community participated in the crafting of the Street Tree Maintenance Plan between the initial stages of inventorying and planning for downtown’s trees. Overwhelmingly encouraging feedback from groups like Viva Downtown, the Audubon Society, California Native Plant Society, Shasta Living Streets, The McConnell Foundation and many other individuals led the City to craft a plan that provided the benefits mentioned above. Several downtown business owners have expressed interest in the multiple benefits provided by shade trees, and have been equally interested in lowering their energy costs and reducing the burden on the electrical grid in Redding’s oft oppressive summer heat. With 72 days over 100 degrees Fahrenheit in 2017, any amount of shade is beneficial for residents and businesses alike.”

On April 21, 2019, The McConnell Foundation hosted a booth at the Whole Earth & Watershed Festival to share the news of this grant and to hear from community members about what their favorite thing is about downtown street trees.